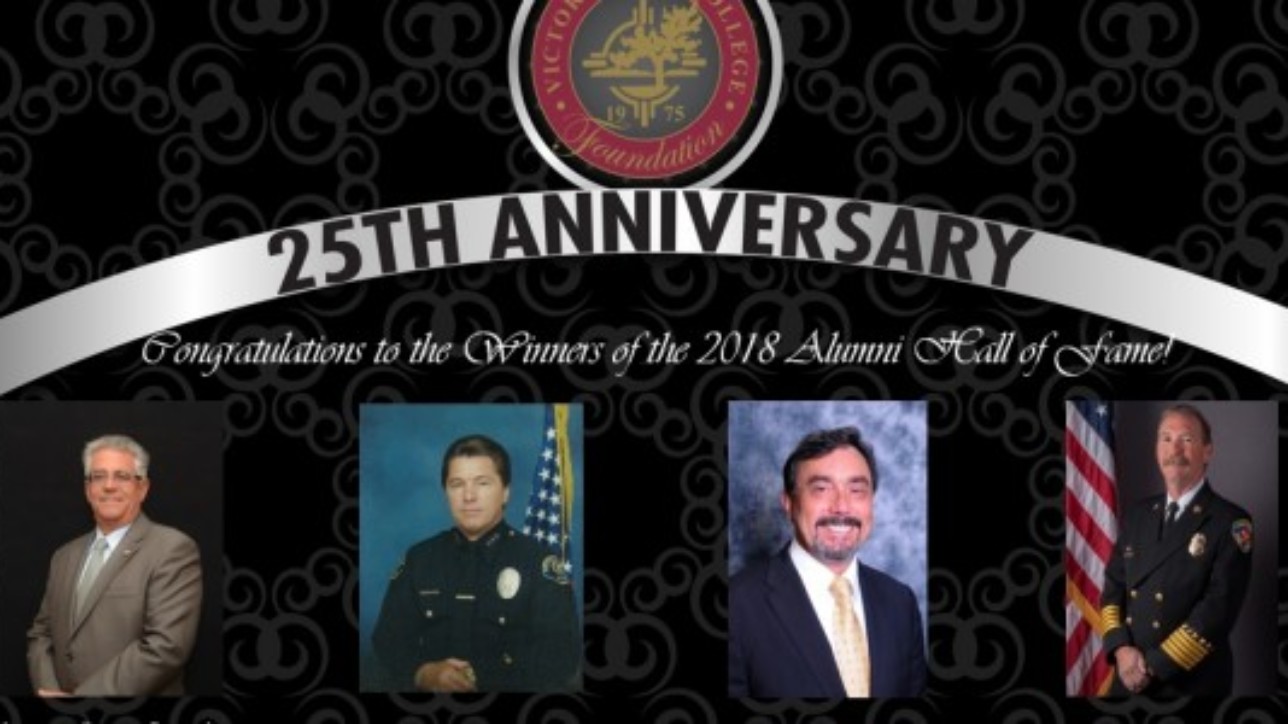 VICTORVILLE, CA – On Saturday, February 24, 2018 the Victor Valley College Foundation will hold its annual Alumni Hall of Fame and Distinguished Service Awards event. For over 40 years, the Foundation has been helping to bring the community together. With the help of the presenting sponsor, Desert Valley Hospital/Desert Valley Medical Group, the Foundation marks a major milestone and will honor four notable award recipients during the 25th Anniversary of the event. Proceeds raised during the evening will support and promote the importance of education in the community.

The recognition ceremony was started by Victor Valley College’s former Public Information Officer, William Gruelich. “Bill” as he was known to his close friends, was an alum of Michigan State University and understood the importance of acknowledging members of the Valley who were doing important work to support the community and the College. Sadly, Bill passed away in 2016. He will always be remembered for his notable contributions to Victor Valley College.

Plans for this year’s event will follow a similar recipe to years past. The Foundation will recognize a Victor Valley College Alumni whose success reflects positively on their alma mater, honors a community servant, highlights an advocate for education and acknowledges a friend of the College. The four recipients include: a retired fire chief, a former mayor and councilmember of Hesperia, a retired peace officer and professor and finally a leader who never worries about possible obstacles in his path, but instead finds solutions to make things work.

The Alumni Hall of Fame is proud to honor and award this year’s inductee, Sid Hultquist. Sid served as the Fire Chief for the Apple Valley Fire Protection District and is proud to have been a part of re-opening two of its closed fire stations. Together with a team of individuals, they successfully passed a tax measure in 2016 which secured permanent funding to add additional firefighters and reduce critical response times. “Improving the quality of life for the citizens of Apple Valley was one of the last and most important things I wanted to accomplish before I retired,” said Sid. He graduated with his degree from Victor Valley College in 1993, but took his first EMT class ten years prior. Sid says he considers VVC to be a big factor of his success in the fire service industry. “VVC plays an important role in giving citizens of all ages the opportunity to enrich their lives whether it’s to pursue a degree, certification, a new skill or hobby or just make you a better employee, “ said Sid. “It gave me the tools I needed to be competitive and to advance in a career where public safety is on the line. VVC offers the ability for all of us to pursue our dreams.”

This year, the Distinguished Community Service honor recognizes the contributions of Thurston “Smitty” Smith. Smitty is a former mayor and councilmember for the City of Hesperia. His leadership, dedication and commitment to his community earned him the support of his constituents and the friendship of his peers. There is rarely an event which Smitty doesn’t attend but he is not just another face in the audience, rather, he takes an active role for the betterment of the Valley. “I love the High Desert and I want to be involved,” Smitty said. “I want my community to be the best it can be.” Some of Smitty’s proudest accomplishments while serving on council include; the completion of the Hesperia Civic Plaza Park, the Ranchero Underpass and the Ranchero Bridge project. Although, he is retired from his concrete pumping business and service to the council, Smitty is still a constant in the community. He can be found serving pancakes for the local high school wrestling team, staging entrants for local parades, chairing the Victor Valley Bicycle tour and serving on numerous non-profit boards. Currently, he serves on Mojave Water Agency’s Board of Directors. It’s a position he calls intriguing and important to our region. “Water is life and it is important that we have good quality for lasting generations,” Smitty said.

Receiving the Distinguished Education Service Award is former VVC Administration of Justice Director and Department Chair, Michael Visser. Mike’s career in law enforcement spans over three decades before retiring as an Assistant Chief of Police. During his long tenure, his background included teaching law enforcement at the Riverside Sheriff’s Academy, San Bernardino Sheriff’s Academy, University of Hawaii, National University, Imperial College and Fort Irwin. Early in his life, Mike learned the martial arts of Judo and Karate. It was an art he loved to share and pass on to others, especially his students. Over the years, he encouraged thousands of students to also focus on obtaining careers in law enforcement and suggested tips and pathways to achieve their goals. Some of his notable achievements include: being instrumental in helping Victor Valley College open the Regional Public Safety Training Center (RPSTC) in Apple Valley in 2012, assisted VVC Campus Police with obtaining new firearms and training and lent his support to help the campus with emergency drills such as “The Great Shakeout” and “Active Shooter Training”. He passed the love of teaching to his son John, who is now an adjunct faculty member in the program. “People helped me when I was in community college as well as my peers when I entered law enforcement. I felt it was important to give back and help as many students as I could,” recalled Mike.

The Presidents’ Award for 2018 recognizes a person(s) or organization for their impact on the College. This year, Chief Executive Officer of Desert Valley Hospital/Desert Valley Medical Group, Fred Hunter rose to the top of the list due to his personal investment in Victor Valley College’s (VVC) Nursing Program. In 2016, Desert Valley Hospital brokered a contract with VVC to pay for 64 students to enter the nursing program, thus reducing the program’s lengthy waitlist. As an additional benefit, the students are offered three year employment contracts at Dr. Reddy’s flagship hospital in the High Desert. Although his time is stretched thin, Fred goes above and beyond to ensure his students are making the grade. He not only personally checks in with every student but holds group study sessions to provide extra tutoring. “Dr. Reddy set the culture of giving back, and I knew I had the responsibility to uphold his legacy,” said Fred. “I am very humbled to receive this recognition. I am doing what I think is the right thing for the students. I am all about their success and there are no words to express my gratitude.” Fred was selected by a joint selection from the College’s three presidents – VVC Superintendent/President Roger Wagner, Board of Trustees President Brandon Wood (during his 2017 term on the board) and the Foundation Board President Eric Schmidt. Fred currently serves as a Vice President on the Victor Valley College Foundation Board of Directors and is a strong supporter of many community events and non-profits throughout the High Desert.

The Alumni Hall of Fame and Distinguished Service Awards Celebration will be held at the Hilton Garden Inn in Victorville on Saturday, February 24, 2018, at 6 p.m. In addition to celebrating the honorees, the event will feature dinner, dancing and silent auction. This will also be the final year for the High Desert Lip Sync Competition. Tickets and sponsorships for the event are available at www.vvcfoundation.com.